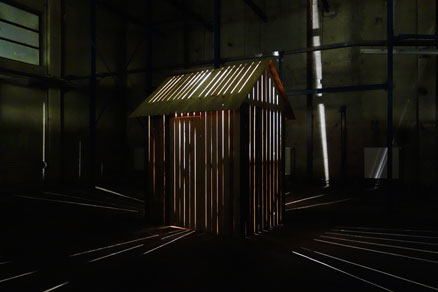 We, who live in the world of reflected light, in visual space, may also be said to be in a state of hypnosis. Ever since the collapse of the oral tradition in early Greece, before the age of Parmenides, Western civilization has been mesmerized by a picture of the universe as a limited container in which all things are arranged according to the vanishing point, in a linear geometric order. The intensity of this conception is such that it actually leads to the abnormal suppression of hearing and touch in some individuals…. most of the information we rely upon comes through our eyes; our technology is arranged to heighten that effect: such is the power of Euclidean or visual space that we can’t live with a circle unless we square it. (Marshall McLuhan, Visual and Acoustic Space)

what moves moves is the second collaboration of musician/composer boris hauf and dancer/choreographer christina ciupke. the piece was premiered at the heizhaus of uferstudios berlin in december 2013.
“our dialogue for this piece started as a conversation about differences and similarities in the perception of aesthetics in dance and in music. using a space within a space we examine dynamics of sound and movement and attempt to balance the two media and their reception.“
a concrete physical object – a wooden hut (2m x 1,20m x 2m) with no windows – is located on a slight diagonal axis in the middle of the space. the audience enters into a relatively dark space. to perceive the hut from different perspectives, distances and on various sensual levels spectators are welcome to move freely in the space outside the hut. after they have settled the hut gradually develops a life of its own. visually impenetrable, the hut’s limited permeability allows only minimal perception of what is originating from inside it. barely perceptible noise, cracks and vibrations reveal the hut’s inner life.

after a while the outside space darkens increasingly and light penetrates the cracks of the wooden structure. nearing the hut eludes the overview of what is going on inside it, the gaze is drawn to the detail. observing from a distance complements the visual cutouts and allows insights as a whole. sound fragments and light movements inside the hut are perceived as physical dynamics and melody fragments can be heard in interstices of building and construction noise.

as performers, christina ciupke and boris hauf are alternately inside the hut and outside of the enclosed structure, in midst of the audience. the perception of interior and exterior space oscillates with the movement of sound, light and the dynamics between audience and performers. encounters, when they occur, are indirect and delicate. by repeatedly becoming permeable for the senses the apparently distinct demarcation of the hut conveys proximity and connectedness.