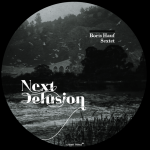 Clean Feed’s PR Blurb:
“What can you expect from a Berlin-based saxophonist (tenor and soprano) who also has a parallel activity as an electronic musician? Well… the unexpected. And the surprise here is not only the instrumental configuration – three horn players, three drummers -, but also the musicians associated.  Keefe Jackson (tenor sax, contrabass clarinet), Jason Stein (bass clarinet) and Frank Rosaly (drums) are names you can find in several Chicago avant-jazz projects, but the other choices made by Boris Hauf, also centered in the Wind City, are a puzzling indication that this sextet is not a common Chicagoan enterprise. Michael Hartman (drums, electronics) comes from the noise/electronic ensemble TV Pow, and Steven Hess works normally in brutal metal and “near silence” electro-acoustic bands like Cleared, Haptic and Locrian, going from one extreme to the other. Before even listening to the CD you’re aware of the proposed intentions: to explore all the contradictions naturally introduced by the performers, and to keep alive the inherent musical tensions. And the truth is that “Next Delusion” boils to the point of explosion. Remarkable.”

Liner Notes by Bill Meyer, Chicago:
The Boris Hauf Sextet is a Chicago band, but it’s not one that any Chicagoan would put together. It’s not so much the triple-horn, triple-drum kit line up, since folks here put together all sorts of unusually configured ensembles, but the combination of people. You might find the Berlin-based saxophonist’s accompanists on the same bill, but not in the same group. Jason Stein, Keefe Jackson, and Frank Rosaly are all members of the jazz scene associated with the Umbrella Music organization, and it’s not rare to see any two of them together. Michael Hartman is from TV Pow, the spearhead ensemble of the city’s truculent electronic/noise scene, while Steven Hess engages in low-volume synthetics and hi-octane art metal with Cleared, Haptic, and Locrian.

The Sextet’s assembly of similar-sounding instruments and contrasting aesthetics exerts a powerfully disorienting undertow, so that the music always seems to be under pressure. In the first two pieces the horns often operate as one, radiating long tones like sunbeams dimly glimpsed through heavy winter clouds; the drums either sit out or chip away at the low brass’s choral figures like dissenters who can’t decide whether to vote against the status quo or just stay home and drink. The reeds take a different approach on “Fame And Riches.” First all three erupt in a popcorn-popping melee in which it’s as pointless to ask as it is impossible to tell who does what. Then Hauf pushes to the center, playing a blues whose acerbic self-challenge brings to mind Roscoe Mitchell, only to melt back into a liquid haze of horn and cymbal tones that coalesce like some alloy forged in an old South Side steel mill. Limber improv and caterwauling laments bring the tensions to the surface on “Wayward Lanes,” and a final group pummel dispels them.

Hauf doesn’t want for things to do at home. He has combos for every occasion, commissions for dance and film soundtracks, and a monthly pre-dusk play date for kids and parents. But nearly every year since 1999 he’s spent time in Chicago. His first time here he dropped his bags at the Tokyo Hotel, a decrepit establishment that mainly caters to locals down on their luck, and looked up Fred Anderson. The AACM founder and mentor of a multitude of Chicagoans invited Hauf down to his bar, the Velvet Lounge, where he schooled him on points of saxophone harmony and played him a Charlie Parker interview. In Chicago Hauf got his first (and only) tattoo, bought his first (and only) baritone sax. He comes to Chicago to make things happen.

Why Chicago? It’s not the only place where you can find musicians who play rigorous orchestral compositions, austere electro-acoustic improvisations, and vein-popping prog-punk rave-ups, but where else would it be the same guy, on the same night? The uncommon fluidity of Chicago’s musical community is well documented, but Hauf’s just as drawn to its attitude. Lozenge and TV Pow, both of whom have welcomed him on stage, may not sound alike, but they share a laconic skepticism, personal amiability, and why the fuck not spirit that’s as American as Bugs Bunny. They’re also able and willing, unlike players in most American cities, to put in the time and faith to make things happen over the long hall. People here know that while they have something precious, they can’t be precious about it. Like the septuagenarian icon/bartender Hauf met his first night in town, they know first hand the unglamorous grunt work that keeps a scene alive. Chicago’s musicians not only match Hauf’s aesthetic orientations, they light a fire under his ass.
Bill Meyer, Berwyn IL, April 2011